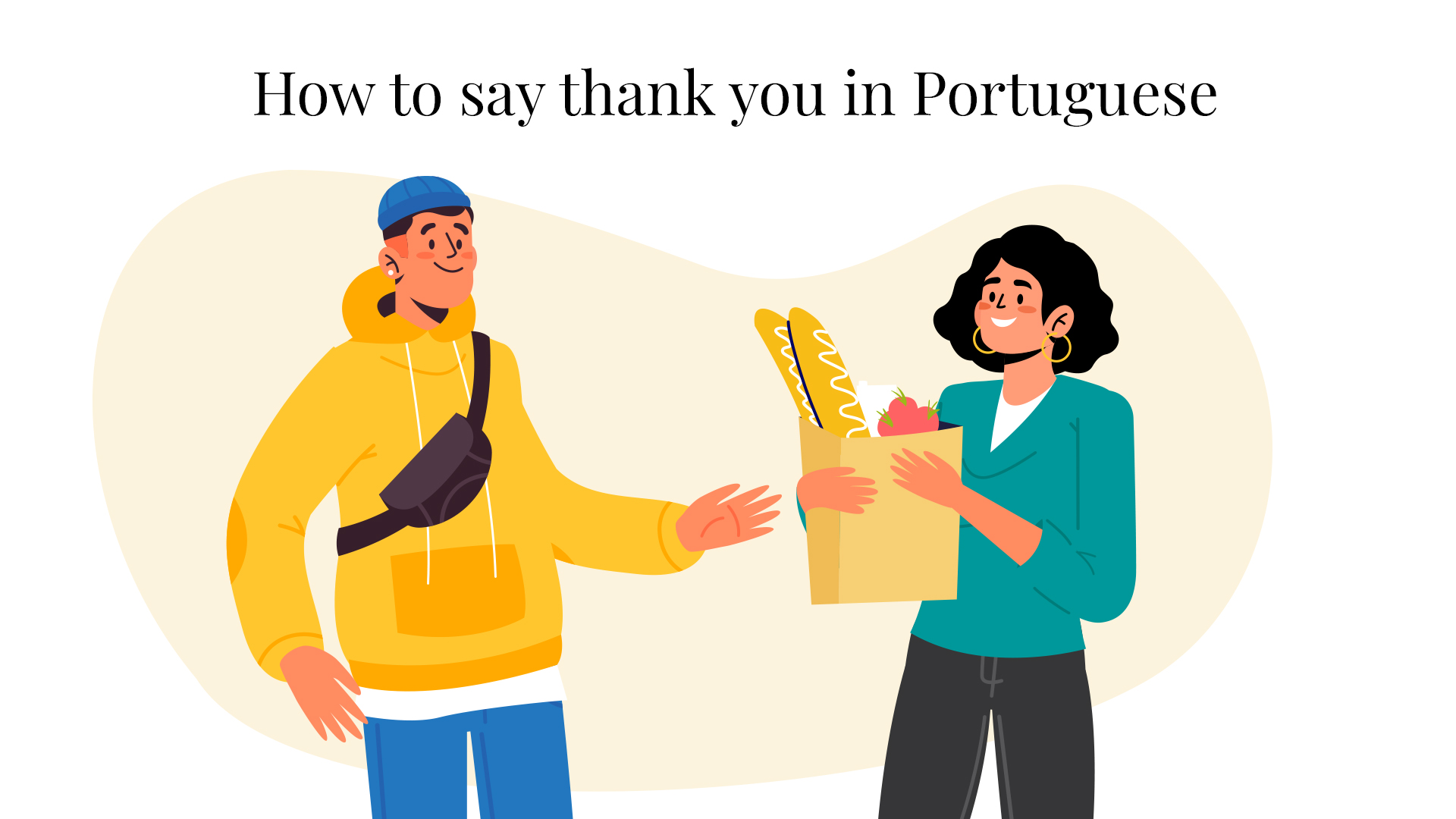 Saying thank you and you’re welcome in Portuguese is essential, whether you’re learning basic Portuguese for an upcoming trip to Brazil or if you’re committed to mastering the language. Understanding when and how to say thanks in Portuguese and how to respond to it will help you convey your appreciation the right way according to the situation.

Moreover, saying the right thing in these simple and pleasant situations will bring that sought-after and warm feeling of making progress. That will help you build the confidence you need to move forward in your studies. As you do so, you’ll be able to use increasingly more elaborate sentences in Portuguese.

So think of this as a solid first step towards a great experience in Brazil.

You may thank me later, in Portuguese, of course.

How do you say thank you in Portuguese?

Marcela said thank you for the present.

He said thank you after sex, is it normal?

This adjective means “to be obligated” and once basically meant that you owed one to the person who just did you a solid, which sounds fair.

Nowadays, you don’t necessarily have to feel obligated to return the favor. Obrigado is just a way to acknowledge that this person did something nice to you.

Well, regarding the word itself, notice that the only important thing in the examples is the gender of the person saying thank you, not to whom this person is saying it.

Even though this is highly unusual, I must mention that you may also say thanks on behalf of a group of people, and that will pluralize the forms we’ve just seen. That means that if the group you’re thanking on behalf of has at least one male, you’ll say obrigados, and if you’re a woman and the group is entirely made of women, you may say obrigadas.

This is important to mention because this happens with every adjective in Portuguese when you’re referring to a group of people.

This anachronism of the language, in many circles, is solved by mentioning both forms of the adjective to acknowledge both genders equally.

All the state representatives voted in favor of the bill.

How to say thank you very much in Portuguese

The simplest one is to add the adverb muito right before obrigado or obrigada.

Notice that regardless of the form of thank you you use, you always will use muito.

Not muita, muitas or muitos.

Aren’t adjectives supposed to reflect the gender of the words they refer to?

Yes, but as I said, muito is an adverb here. This is an important detail about muito.

Muito, in this case, is an adverb, and adverbs in Portuguese never change their form. The other forms I mentioned exist because muito also happens to be an adjective, which, in turn, always reflects the words they refer to:

In these examples, the forms of muito are both adjectives. This is usually the case when you can replace it with many.

Another very simple and a bit more personal way to say thank you very much in Brazilian Portuguese is to add the word mesmo right after obrigado or obrigada:

Thanks a lot, Joanna, I owe you one!

Thanks a lot, Pedro, you helped me a lot!

Just don’t forget to emphasise the word mesmo, so you sound sincere when you say this.

What preposition to use with obrigado/obrigada

Now that we know the most important way of saying thank you in Portuguese, it’s important to know how to be specific about what you’re thankful for.

The preposition we’ll use here is por and its variations.

Thank you for helping with the move.

I have to say thank you for being so understanding.

Notice that the preposition por in these examples is not followed by articles (in these cases, the words that follow are verbs, which are never preceded by articles).

Why is this important?

Because when the preposition por is followed by an article, it will combine with this article and change substantially.

Por is the Portuguese derivative of Latin per. When combined with the closest thing Latin had to a definite article, the, it became per illum and per illam.

It’s that which Portuguese has beautifully contracted to pelo and pela, and its plural forms.

For a masculine singular noun, por is followed by the article o:

Thank you for the time you spent here.

For a masculine plural noun, por is followed by the article os:

She never says thank you for the cookies I give her.

For a feminine singular noun, por is followed by the article a:

Thank you for the help with the move.

For a feminine plural noun, por is followed by the article as:

She shouted “thank you for the interruptions, but I can explain it myself”.

Formal ways to say thank you in Portuguese

Obrigado and obrigada are the most common ways of showing gratitude in Portuguese. Still, if the situation is more formal, you can use some other forms.

For example, if you just wrote an email, you may want to close it formally if the situation requires.

In this case you may say grato/grata. 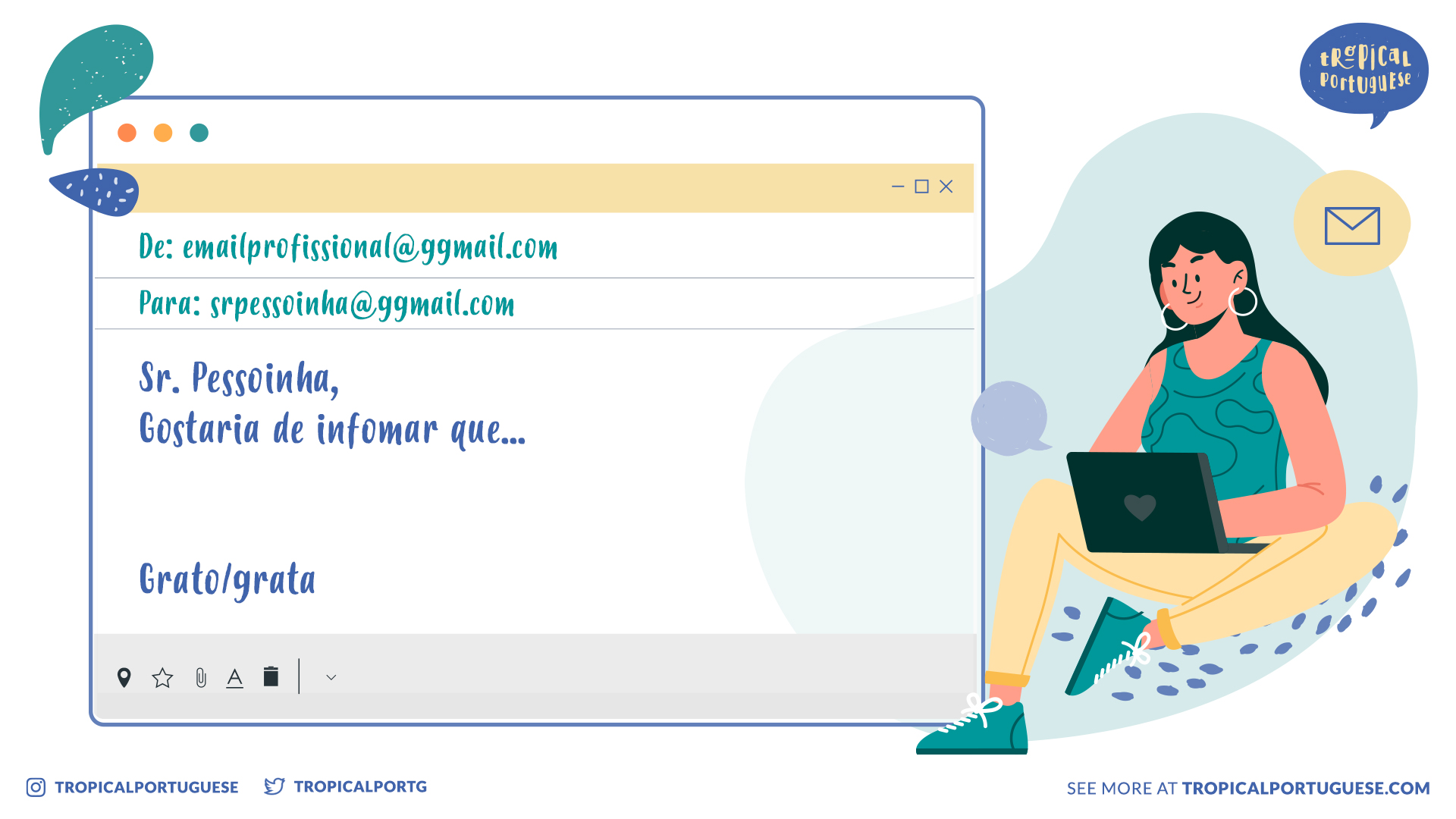 Another formal way to say thanks that is better kept for very formal or ironically humorous situations is agradecido/agradecida. This form literally means grateful and conveys an idea of distance and deep respect between the people in this interaction and is very rarely used.

After being forgiven by the school principal for cheating on the test, the boy said thank you.

The girl, who also cheated on the test, said “thank you” because the boy didn’t snitch on her.

Informal ways to say thank you in Portuguese

Expressing ourselves in ways that get us closer to people is what learning languages is all about. It also helps us understand the culture a bit better. The reality is that informal language is where the fun hides.

The first thing you want to do with obrigado and obrigada is drop the initial vowel.

In conversational Portuguese, people rarely pronounce the initial o. So, in a friendly conversation, simply say:

Thanks for the help, friend!

Up to this point, all forms of saying thank you were gender specific.

All the ones you’ll learn from this point on are even easier. Get your notebook out because the ways to say thanks in Portuguese that follows are all gender-neutral.

The first one of these is valeu. It comes from the verb valer, which means to be worth, to have as value. So when you use this word, you’re literally saying “This action/thing was well worth it”.

Thanks for the helping hand, dude!

This one is for the enthusiastic ones.

If the situation is more than just a small favor, you might want to show how happy you are because you got what you needed. Brigadão is your go-to word when you’re really grateful and also want to show proximity to the person you’re saying it to. You’d use this with friends and family in all types of circumstances.

Thanks, guys, now we may order some pizzas to celebrate!

One way of saying thank you that has become more popular recently is the word gratidão.

This is what you’re looking for if you’re out of words at a tropical beach in Rio de Janeiro. It means gratefulness.

It sounds very poetic, but bear this in mind if you are not a millennial:

People who actually say the word hashtag love this word, but not only them. Those more connected to the universe, with a zen attitude and handstand pictures on Instagram, also use this instead of obrigado. 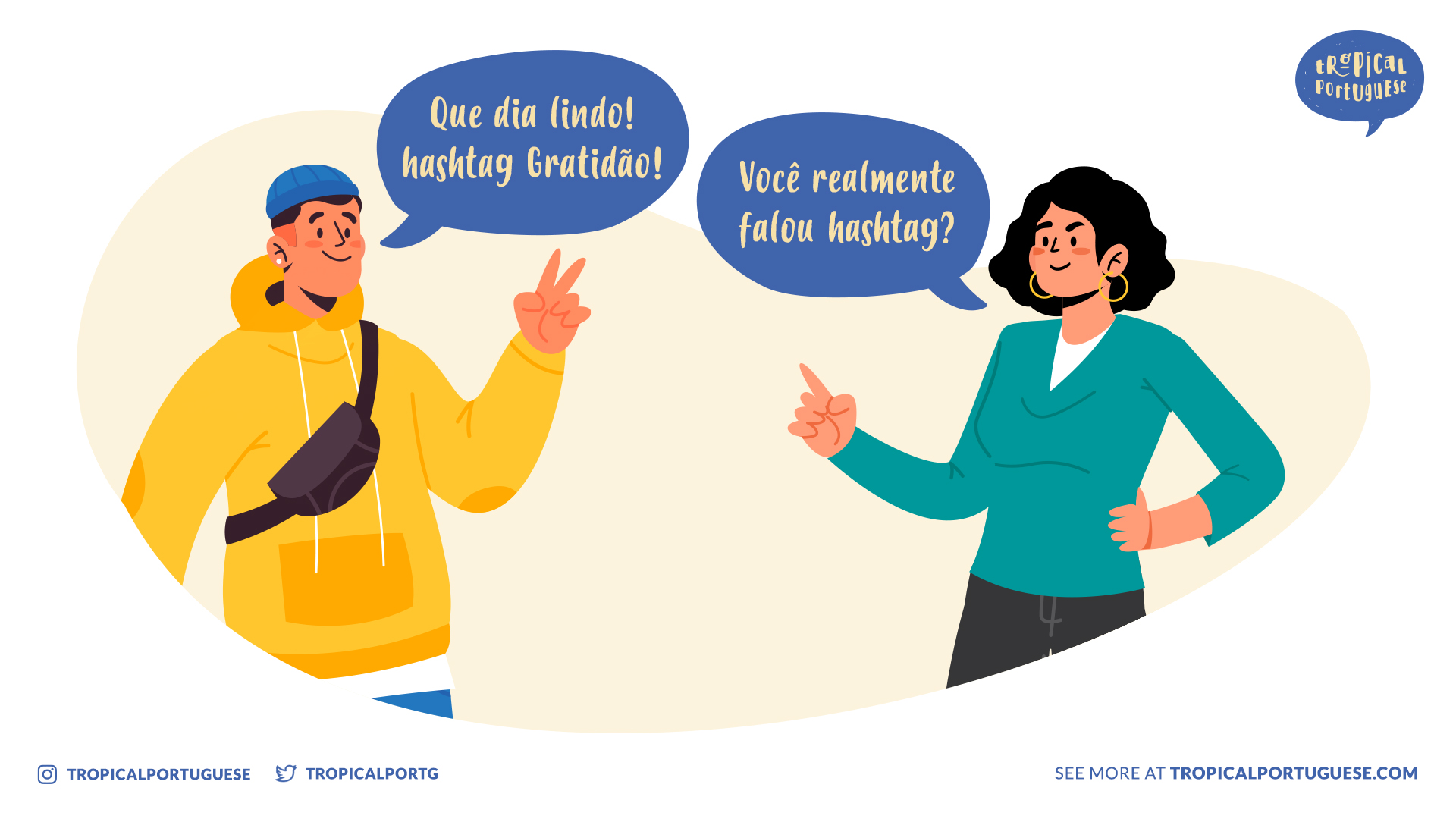 How to say thanks via online messaging

One way that might be even more relevant than all of the other informal ways of saying thanks in Brazilian Portuguese is the online version. If you know Brazilians, you might have been asked for your “Uats”. Or your “Zuppy”.

If you are familiar with how Brazilians pronounce final consonant sounds, you might have guessed that “Uats”, and “Zuppy” are the ways we say Whatsapp. This app (or “uppy”, as we pronounce it) is by far the most popular messaging application among us, and knowing the abbreviations we use there is very important.

When we type our messages, we tend to prioritize practicality over clarity. So when we say obrigado or obrigada online, we cut it short to obg, regardless of gender.

All the other forms can also be used online. It’s also a matter of what you like the most.

How to say you’re welcome in Portuguese

In this type of interaction, another very important thing is how to say you’re welcome. Again, there are standard and more conversational ways to say it in Portuguese.

What makes it simpler, in this case, is that all forms are gender-neutral, so the only thing to keep in mind is the relationship you have with the person you’re saying it to.

The most versatile one is de nada or por nada. Even though they might look like two different ways of saying you’re welcome, the different prepositions do not change their meaning. They both literally mean “for nothing” or “that wasn’t anything you should worry about” and are interchangeable.

They also refer to the meaning of obrigado of being obligated to return the favor. So when you use either of these forms you’re saying relax, you don’t need to repay me this favor.

You’re welcome! It was super easy to walk your dog for a whole month!

Another more intimate way of saying you’re welcome is Que isso! This stand-alone sentence is similarly used to show that your effort wasn’t a problem.

Don’t worry! It was a pleasure to help!

Another even friendlier one is Magina! This one also works as a stand-alone sentence and is a form of the verb imaginar, to imagine, after dropping the initial vowel.

At this point, you may notice how conversational Portuguese may have this tendency of dropping an initial vowel in longer words.

Well, this one means that the person shouldn’t even imagine having to repay this favor. This usage shows proximity and overall good-will.

Don’t even mention! You can always count on me!

The last one and my personal favorite is de boa. This one could be translated as all good.

All good, man! Whenever you need!

Cultural tip – Just so you never miss a beer

Now that you know all the ways of saying thank you and you’re welcome in Portuguese, it’s very important to know one last thing to use it correctly.

In Brazilian Portuguese, obrigado may also mean no!

If you are being offered something and you want it, say yes, please.

If you do want the beer and say obrigado the person will think you are ok and don’t want it. Basically, it will be understood as a sign of you thanking for the gesture of offering something and politely refusing it.

Wait until after you’ve opened it to say valeu. Just to be sure.

What is your favorite one? Do you have any good stories where you had to say thanks or you’re welcome in Portuguese? Leave your comments below and let us know!

Vlad is a modern nomad, multi-language content creator, and online teacher that does his best to show his students, readers, and friends the joys and countless benefits of language learning. 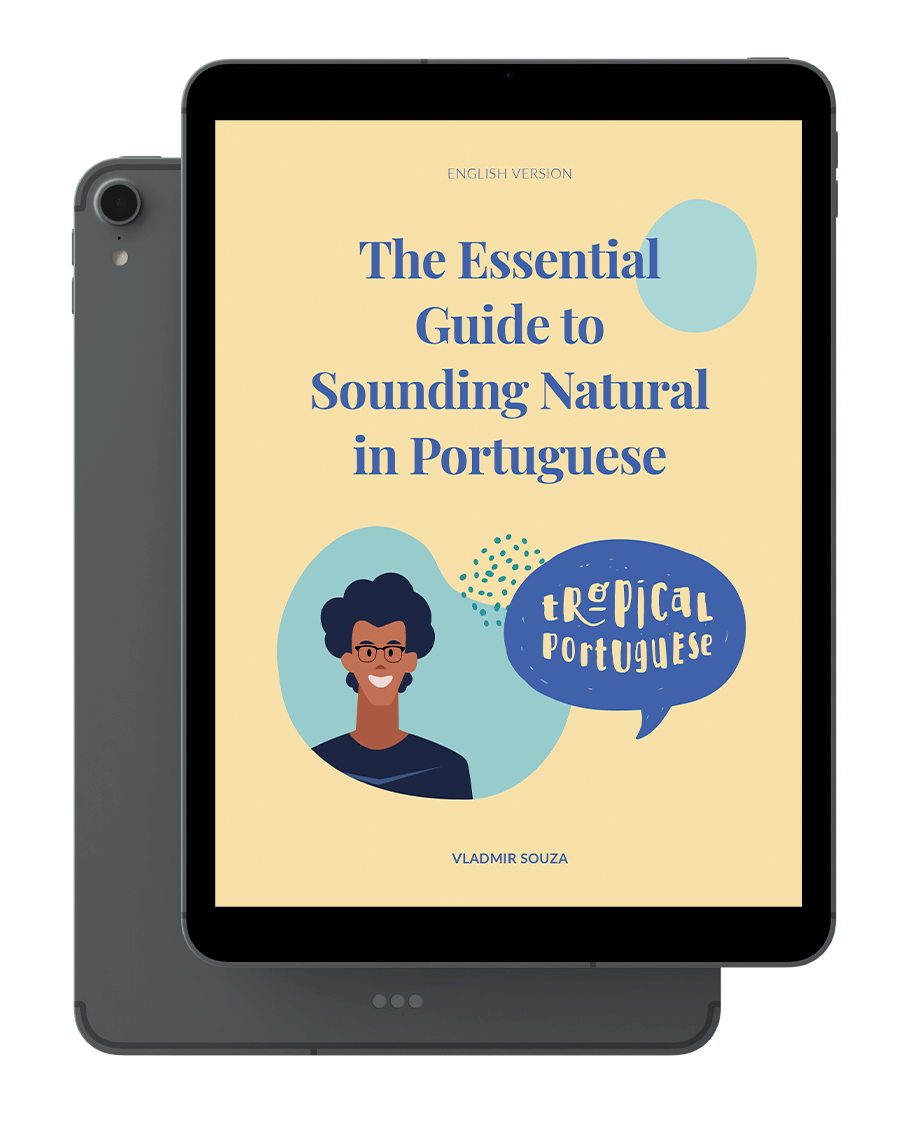 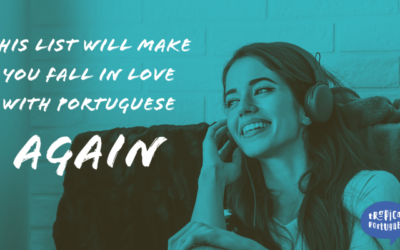